It's been quite a while since I have posted - must make amends. 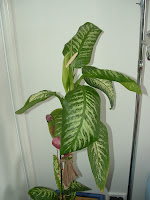 Almost 20 years ago, I purchased a fancy indoor plant for home.  A common-enough one in the tropics (seen many of them in the rainforests).  Anyway, this thing (forgotten its name after all this time) went ballistic.  Grew all the way up to the ceiling.  Somewhat top heavy with quite a sturdy, single trunk. 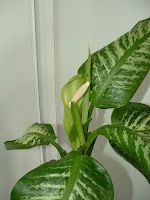 When we shifted about two-and-a-half years ago, in spite of taking great care, we ended up snapping the trunk right off, quite near the base.  We kept it and were about to throw it out when we noticed it was starting to sprout from the base.  Since then it has done quite well - as evidenced by the photos.
The photos also show that it has flowered - finally - after some 20 years.  I can only hope that I am, similarly, a late bloomer.
Posted by Smirc at 2:45 pm