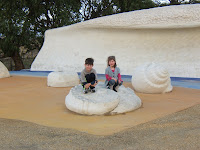 Just spent a weekend in the Mt. Gambier area. Stayed at the Port MacDonnell Foreshore Tourist Park, in their on-site flat. A bit old, but spacious and comfortable - only downside was the cleanliness (or lack of it) in the unit. Stove (oven & grill), toilet and washing trough were all putrid - not even up to one star standard. Left for there after 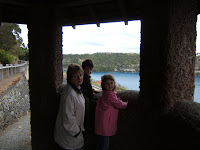 work and Ben & Chloe had finished their school days (Chloe's at kinder now) - an easy trip so we could stay that night and get a good start to our touristy things on Saturday. 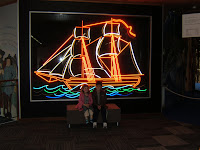 slept in) and then on to the playground at the Brown Lake centre, which made a really good contrast in colour to the Blue Lake. From there it was on to the Umpherstone Cave or sink-hole (which we returned to after dark - much more interesting). We 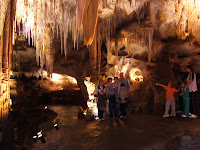 then visited the tourist info centre for some ideas. After Macca's for lunch we checked out the Cave Gardens. From there to the Tantanoola Cave for Ben & Chloe's first caving experience, which we were a bit nervous about, but they really loved it. We had planned tea at the South Eastern Hotel, so headed back to the unit to have a quick break before returning to the 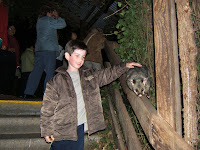 Mount.
Checked out the Mini Blue Lake on the way back to Port MacDonnell. Some kids (one named Ben) were diving in there (from about 15 metres height). Really spectacular and frankly, a bit scary, but they seemed to handle it well.
A short rest and then into the Hotel for tea. I had $70 worth of vouchers I had won at poker on some previous visits so this went a long way towards paying for the night. After tea, we went back to the Umpherstone sink hole, expecting, hopefully, to see a possum or two. Well, this was the highlight. Possums everywhere, and really tame. Everyone except Chloe (too nervous) got up-close and personal, being able to pat and feed them. This experience rounded of a great Saturday. 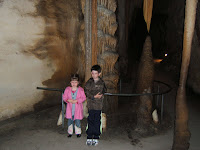 Sunday, we headed home, with a few stops on the way. First was the Princess Margaret Rose Cave. This was much deeper, narrower and bigger than Tantanoola but everyone ventured forth without any problems. From there we had a wander at the mouth of the Glenelg River at Nelson. Ben had a run-in with a tiger snake but handled it exceptionally well. Did everything right. Warned the rest of us, didn't panic, kept his eyes on it and stayed fairly still 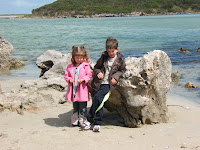 until it went off into the undergrowth. Aido would have been really proud of him. We had lunch in Portland after getting up close to the Gas Rig moored in the harbour and the whale skeleton in the info centre. Interesting to see a quote in there from John Brabyn Mills, a direct line ancestor of Ben & Chloe. John and brother Charles were pioneers around Portland and Port Fairy.
Plain sailing then back home. A very interesting and successful trip.
Posted by Smirc at 8:52 pm No comments:

The old Magna was getting a bit old, worn & tired - bit like me actually, so we decided it had to go (but not me, thankfully). Shopped around a bit, priced a few used cars that might have been suitable. Looking for something that would drive as easily as the Magna but a bit smaller (AKA easier to park), friendlier and economical. Thanks to Nicole Kelson at Clinton Balch's Warrnambool Nissan and KIA who expertly steered us into the new car section, 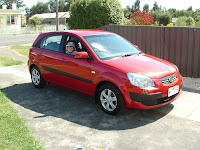 we have ended up with a metallic red KIA Rio LE Hatchback. Their trade-in offer was pretty poor, but got that increased and they agreed to fit Cruise Control for cost at the first service - so the deal was done, signed, sealed and delivered.

Picked up the new wheels on Friday, 1st February. Robbie is fair whizzing around the place, terrorising all and sundry, especially in all those tight parking spaces she used to avoid. I was pleasantly surprised by its get-up and go and how quiet it is at speed (100kph or so). The fuel guage has hardly moved since we got it, in spite of Lorelle having a good test drive (and then refusing to give it back!). Ben and Chloe love it, although Ben is disappointed that he can't sit in the front due to the passenger air-bag. It'll be a while before Robbie goes into town "the back way" - via gravel roads, as she won't be wanting to dirty her little treasure.
Posted by Smirc at 4:53 pm No comments: