A Christmas feast, even for Stanley .....

Even snakes have to eat, so it was a special Christmas rat for Stanley. We didn't gift wrap it as 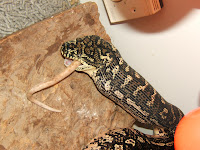 we figured he might have problems unwrapping it - what, with no arms or hands, could prove to be a little difficult.

I had hoped to get a picture of him a little bit earlier in his feasting, but he was a bit quick. Once that rat started goind down the gullet, things happen pretty quickly. Do snakes have a throat? If so, where does it start and where does it end? Who knows? It may look as though he's got a long, thin tongue, but that's just the tail end of the meal. He went and had a nice sleep soon after.
.
The way 'stupid cat' (Maisie) has been acting lately, the next picture just might be of a fluffy, grey tail disappearing down the serpant's throat.
Posted by Smirc at 12:48 pm No comments:

New Year's eve was a stinking, hot day - up around the 40 celcius 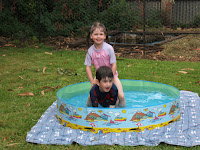 mark. So we thought we would get a little wading pool so that Ben & Chloe could have a bit of a cooling romp in the back yard when they and Lorelle dropped in for the usual New Year's eve get together. Picked up a cheapie at K-Mart (it was even an extra 20% off for some reason). As you will see by the pictures, it didn't take much to set it up. What you might call "The Dehydrated Pool" - simply add water. It's actually the same as the one Adrian & Matt "sank" into the back yard for the ducks. Along with a backyard 'shower' contraption, the pool was a real hit. Kids love water, and it doesn't even have to be hot weather. They were in and out of the pool all afternoon and into the evening. It must have been very 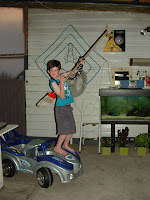 refreshing as Chloe decided that she'd round things off with a good dancing exhibition and Ben added his bit with the air guitar - all to the accompaniement of some of Robbie's CD's - REM, Rod Stewart, Bon Jovi, etc. You get the picture and now probably sympathise with me over her choice of music. 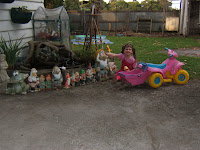 Chloe even gathered together all her friends around the display pond so that they could watch on. Only visitor during the evening was the ever reliable Albert who joined us and saw in the New Year. It 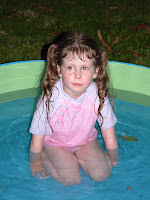 was really nice just sitting out the back, especially once things started to cool down in the evening. Only problem was the occasional mosquito - they really get stuck into poor Chloe. She ended the evening with a number of prominant red welts on her face, arms and legs. Amazingly, in one of the pool photos, we actually snapped one about to land on her cheek. Check the photo and you will see the little bugger about to set down on her right cheek.
.
After Lorelle and the grandies left, Albert, Robbie & I retired to the lounge and took in a bit of TV until midnight rolled around. The usual greetings for the new year, and I won the 'pinch and a punch' but as expected Robbie says this doesn't count for January. She certainly has problems with accepting defeat.
Posted by Smirc at 12:05 pm No comments: 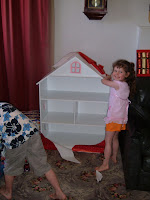 We had a slightly different lead up to the big day this year. Adrian was going to be in Western Australia over Christmas, so we had the family get together a bit earlier than usual. Followed our normal patterns, though. All the pressies placed under the tree, and then the family gathering and present opening ritual. 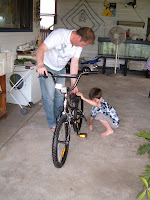 Everyone seemed pretty happy with what was on offer - this year we all decided to scale down a bit to save money, at least as far as the adults were concerned. Chloe was most impressed with her doll's house/bookshelf - although I doubt it will be a tidyness 'magic bullet' (a bit too much too expect from Miss Drop-it-anywhere). Ben was absolutely wrapped (no pun intended) in a new bike (DON'T LET AIDO RIDE YOUR BIKE, BEN!) from mum and a microscope kit from Grandma & GP. 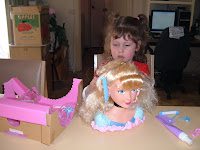 Santa still came through on Christmas morning so they picked up a few more things. Chloe very impressed with her special make-up model. They then went on to spend the day with Dad and the rest of the Watts' clan for their family celebrations.
Posted by Smirc at 6:02 pm No comments:

The holiday break has not been kind to our menagerie.

First of all, one of the ducks died. Robbie found it in the pond one morning. Sign of what appeared to be a superficial wound, but nothing to suggest it died a violent death or anything like that. The amazing thing is that since then, and even though I have emptied and refilled the pond, the surviving duck will not go in it - they used to love the pond. Go figure!

We have also had some sort of fungal disease spread through the aquarium. All fish, except for the walking fish died within a couple of days. The walking fish, which I have affectionately called "B Double", still survives apparently in quite a healthy state. I have treated the water a couple of times so we have added just a few, cheap fish - to test the waters, so to speak. Have also added a heater, as we may as well go tropical, which provides for a greater and more interesting variety of fish.

Why "B Double"? I hear you ask. No, not because of its size, but B-Doubles have lots of axles - think about it and the penny may drop; if not, drop me a comment.
Posted by Smirc at 4:35 pm No comments: