One Swallow does not a summer make ...

Looks like the Marr menagerie is about to get bigger. About this time of year, it's not uncommon to get swooped by a magpie or two, but we had a similar problem at the front door with, of all things, a swallow (see, it's only you rude minded buggers that took the title the wrong way). 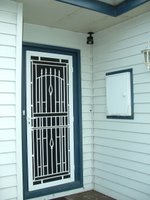 We were just heading out the front door when a swallow ( a welcome swallow to be accurate) was just flying in - as we discovered, to build a nest on the detector right in the corner at the door. Nearly brained it with the flywire security door. Had another couple of incidents where the bird(s) have nearly flown in the door. Both swallows and Marrs are now more watchful when exiting via the front. 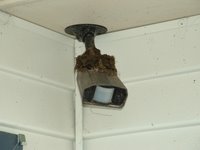 our doorstep, but what the hell, there could be much worse things at the door. The thought of a little family of swallows taking up residence in fact is quite appealing. We believe too, that if this nest works, they will probably come back each year. Apart from the constant interruption by people going through the door, it should be a nice, warm, protected and safe spot for them - and I would imagine they will get used to human traffic.

We'll just have to wait and see what transpires.
Posted by Smirc at 5:30 pm No comments:

Had a couple of official engagements on the weekend of 16th and 17th September. 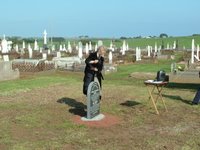 The first was the unveiling of a memorial to the first burial that took place at Tower Hill Cemetery to mark the 150th anniversary of the Cemetery. The grave marks the resting place of William Duodecimus HALHED the designer of the Cemetery layout who picked his burial place when he did the plan. He died 12 Sep 1856 and his wife, Mary followed him soon after. Ben found his first Cemetery very interesting, as the geometrical layout intrigued him and he wanted us to read all the names as we passed them. Wisely, since it did drag on a bit, Robbie took him wandering and as he decided he was a dinosaur that went about growling loudly, it was a good decision to keep away from the official ceremony.

The second function was the official opening of the Warrnambool synthetic hockey pitch. As a past President and Life Member of the Association I actually rated an invite to this one. A representative Warrnambool side 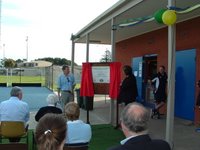 played the Victorian U15 squad in an exhibition match prior to the festivities. Needless to say, the Vics won, but the local team acquitted itself with distinction. The Ceremony was conducted by Warrnambool Mayor, Cr. Glenys Philpott who has a long association with Hockey in Warrnambool. We didn't stay for the free "eats" which looked very appetizing but decided instead to head back home. Ben stuck it out very well, again, even though he must have found the whole thing very boring.
Posted by Smirc at 5:09 pm No comments: 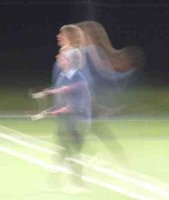 there on Wednesday nights for a run. The combination of damp evening air, and the artificial lights make photography very difficult as you can see by the photos. Rob would say, of course, that the blurring is caused by her incredible speed on the pitch. I'm not quite so sure, but for the sake of peace & harmony, I guess I'll just have to agree - at least publically, that is.

Anyway, the new facilities are absolutely fantastic - even I had a five minute run last week (sorry, no photos - thank god!)

I also took a small video of Robbie's scintillating skills, but haven't been able to upload that into the blog - as yet. Hopefully there is a way I can achieve this - still working on it.
Posted by Smirc at 4:12 pm No comments: