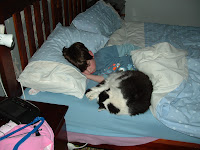 Couldn't resist this photo when we went in to shift Ben from one bed to another
Posted by Smirc at 10:34 pm No comments:

No, not me. I had an excellent birthday weekend. Great dinner at the Allansford Pub bistro, 18 of us there. Unfortunately, the usual suspects amongst us (they know who they are) got in while 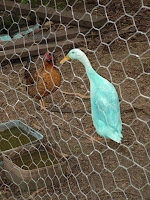 we were otherwise occupied and pulled off a neat trick. We were expecting something of course, but they went beyond the normal boundaries and involved the livestock, or should I say, the fowls.

Poor white duck is no longer white. As you will see from the photo, at least crazy chook wasn't subjected to their indignities. But, not all is lost. For some reason the spray bottle was left at the scene, so we have ready made ammunition for our own foray into retribution when the opportunity arises - after we get the bottle checked for fingerprints, that is.

Then, on Sunday, joined in a poker game at Gav & Mary's. Talked Chrissie into going and bugger me dead, she won the first tourney - at her first ever attempt at face-to-face. I came third in the second one, so she ended up with a nice win and I had a small loss. But, I think I may have created a monster.
Posted by Smirc at 7:38 pm No comments: