The Sport of Kings

Lashed out a bought a part-share in a racehorse - Robbie's birthday/Christmas/Anniversary present.


SLEEP ON IT
Personally, don't like the name - we put forward a number of better alternatives, but that's the one that was selected.  It's out of Cushion on the dam's side, so I guess there is at least some connection to its pedigree in the name.
Speaking pedigree; on the sire's (AD VALOREM) side it has DANZIG, NORTHERN DANCER and NEARCTIC and on the dam's (PAILLASSE) side it has OCTAGONAL, ZABEEL and SIR TRISTRAM.  So it is very well credentialed - but of course everything comes down to the horse itself.  Pedigree alone doesn't win races. 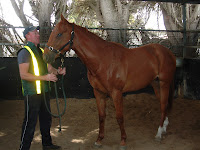 It is trained locally by Matty Williams (that's him in the picture - the one on the left, with two legs). He has a fantastic set-up out at Wangoom and a second site at the Warrnambool Racecourse itself.
It has trialled a couple of times and looks very promising.  Matt was hoping to give it a start in a 1000m 2YO maiden as a lead-up to the Warrnambool Carnival.  Unfortunately, has developed a bit of shin soreness and will now be spelled for eight weeks.  He regards SLEEP ON IT as an above-average prospect, so I guess we'll just have to wait and see.
﻿
Posted by Smirc at 3:00 pm