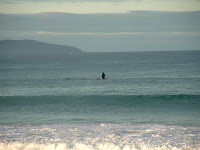 Had a very pleasant Saturday arvo - drove to Lorne to meet Adrian & Chrissy for lunch.
On the way back we decided to go the Great Ocean Road route, even though it's a lot longer than returning via Colac.  Between Apollo Bay & Marengo (the western end of Apollo Bay) we came upon a traffic jam (actually, the second for the trip - the local Copper was conducting random breath & licence checks just east of the town).  Lots of cars parked on both sides of the road - figured it could only be one thing, so we pulled over too. 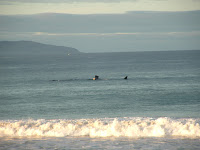 Sure enough, there were two whales gambolling just off-shore in the shallow water.  Stopped and watched them for about ten minutes.  Even though they were relatively close to shore, it was difficult to get close-up pictures of them.  Did manage some, two of which are included in this story, but that was the closest we could get, even on maximum zoom.
Posted by Smirc at 7:22 pm No comments: 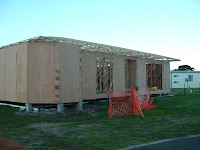 Roof frame is on and the outer "casing" mostly fitted, although the window & door holes have not been fully cut out.  From the sides and back it just looks like a fully enclosed box - but the shots from the front give a better indication.
We did find a couple of problems, though.  The internal wall between the lounge and kitchen/dining had been cut incorrectly and they hadn't allowed sufficient clearance above the lounge window for the air conditioning unit. 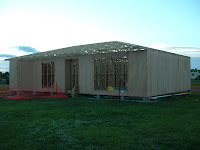 Both of these defects will be corrected without any problems, but I guess it's lucky we checked at such an early stage.
One other problem was encountered - but this was Robbie created.  When we went in through the "gap" that is the front door opening, she went through some temporary sheeting that had been laid in place.  Fair, a-over-t she went.  I showed my usual concern - for the house, of course.
Posted by Smirc at 9:51 pm No comments: 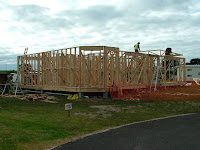 Work is progressing on the Castle.  In fact, in the last week, things seem to have really taken off.  In the last installment, we just had the pipes laid and they had just started on the flooring. 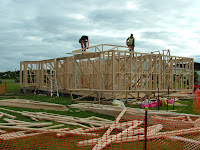 By this Monday, most of the frame-work is in place and they have started work on the roof frame.  You can really start to get an idea of where everything is going to be - gaps where windows and doors will be fitted, internal wall positions, etc. etc. 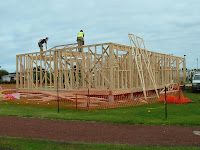 Guess I had better contact Rod Stephens and organise when he will be ready for wiring, etc.  We want to get telephone, data-points, TV & Austar plus home theatre and projector cabling and connections all put in place before plastering and such is commenced.  This should prove easier and cheaper than if we wait until after the event to get them done - although I am sure that once we have moved in and lived there for a while, adjustments will need to be made; but we'll cross that hurdle when we come to it.
Really taking shape now - Robbie is almost becoming a believer.
Posted by Smirc at 2:17 pm No comments: 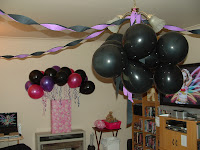 Chloe had a great 7th Birthday Party at home on Saturday - the theme for the day was Harry Potter.  Lots of decorations and Lorelle made capes, wands, balloons and take-home parcels for everyone - all in keeping with the theme. 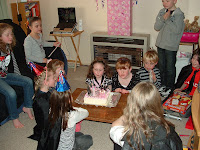 She had many of her school friends there and they all had a ball.  Even some of the parents went away wishing they could have gotten into the spirit of the afternoon.  For whatever reason, Chloe's extended family on the Watts' side decided they weren't able to attend, but this didn't dampen her spirits at all - she was too busy having fun. 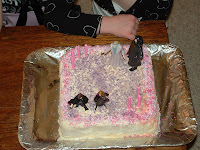 There were lots of spells cast, wands waved and general kid's party games to keep everyone interested and happy.  I'm sure she will remember her seventh for some time - well, at least until Ben's 10th or her own next birthday.  The bar has been set pretty high, so we can look forward to these with some anticipation.
Posted by Smirc at 2:04 pm No comments: 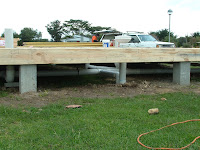 Work continues on the Castle.  Flooring frame-work has been completed and the plumbers have moved in.  Lot's of PVC in evidence as the various pipes are being installed.  Robbie said the pipes leading from the toilet are definitely not big enough for my requirements, but I let that one slide through to the keeper, or pumping station, whichever seems more appropriate.  She didn't think she was effluent enough for such luxuries as extra large pipes.  Gotta do something about that girl's vocabulary. 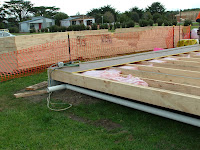 You will see from the above photo that we even captured a workman on-site - beavering away at getting plumbing things into action.  Hope they know what they're doing as wee (sorry, we) wouldn't want key pipes to fail under pressure.
Also noticed something that was a surprise - should've read the specs better, I guess.   They are also installing under-floor insulation.  Probably a legal requirement these days, but news to us.  Not complaining, mind you as it is a definite plus.
Posted by Smirc at 10:16 pm No comments: