When we were at Ziegler Parade, I attached a couple of racks to the inside of the pantry door.  Robbie found this to be an invaluable aid and was impressed with the pure artistry & professionalism of my work. 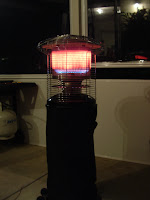 Well, we've been in the new house for a while, and just last night she said "I think I'd like to have spice racks in the pantry, you know, just like at Ziegler Parade".  So, today, the shopping trip was on, but it seems like spice racks are hard to come by.
Went to a few places - no luck.  Finished at Bunnings (now they would HAVE to have them).  Still no luck.  But all was not lost, for we did come away with something that could be hot (just like many spices) but certainly not suitable for mounting on the inside of the pantry door.
Turned out to be an expensive trip for something so simple.  Still, the sunroom has certainly been "spiced up".  We even had to have a couple (okay, three or four, but who's counting?) drinks out there just to check it out.
Posted by Smirc at 8:14 pm