Daughter Lorelle gave Robbie an "automated" vacuum - not the robot type, but one that just sits in the corner and you can sweep things up to it, and voila, it sucks it all up. Somewhat novel, but it works well - at least until the other night.
We were awoken several times (its one fault is that it's a bit loud when operating) when the unit went into vacuum mode. Investigations didn't reveal any cause, although maybe a mouse or large spider wandering past might be the culprit.
Same thing happened the next night with investigations not revealing anything.
We were sitting at the table this afternoon when it went off again. Hadn't noticed

anything but when I checked the "hopper", lo and behold there it was - a little mouse had been sucked up into the bowels of the unit. Of course, I wasn't allowed to feed it to Stanley (our pet python - over 2.4m long) so had to release it outside. Hopefully, it won't be back tonight disturbing our slumber.
Posted by Smirc at 1:16 pm No comments: 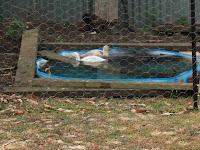 As a result of Christmas, the Marr menagerie continues to grow.
Making full use of the recently constructed chicken run; we have added two ducks, two bantams and an extra guinea-pig.
The duck additions are two Indian Runners. Quite unusual and very funny to watch. Of course, with ducks, we had to add a pond as ducks really need a good water feature so they can swim and dive and do all the normal "duck things". Conned Adrian and a work colleague (hi, Matt - how's the head?) into digging a hole for the pond, but as you will see, they ran out of puff about half-way down (is half-a-hole still a hole?). Adrian claims they ran into too many tree roots to continue, but I suspect thay just ran out of beer, red-wine, vodka, whiskey, white wine, etc. and were unable to continue. 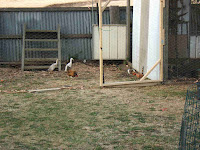 The new guinea-pig is a female about the same size as the existing one, which we think (and hope) is also a female. It is very shy and is only now beginning to venture forth from its hide-away. Still, it's good company (we presume) for our old, lone g-pig. As can be seen on one of the photos, it is just poking its nose out of the entrance to their home.
The new bantams are not yet in the chicken run. They are young Ancona 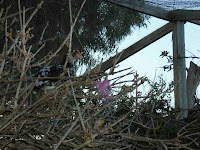 chickens - don't know much about them but they look somewhat "sporty". When we eventually transfer them to the run, they may prove to be a bit flighty - still, we'll cross that hurdle when we come to it. They are currently in the main aviary because when we put them into the chicken run, crazy chook immediately attacked them - obviously very territorial. The safest option was to get them out of there until they are bigger and more mature (then they should be able to give as good as they get). Crazy chook is laying again and it will be a while before the Ancona's start adding to our egg count.
Posted by Smirc at 11:52 am No comments:

Completed the usual, annual Marr family tour of Christmas lights in the district on the Thursday before Christmas Day.

This was Ben's third such excursion but it was the first time for Chloe. After having spent many years doing the same thing with Adrian & Lorelle when they

were younger, Lorelle rejoined the group for this year.

Have to admit, we haven't seen Chloe quite so excited. We walked a number of Courts that had several houses lit up. It was a lovely, warm evening so conditions for getting out of the car and having a stroll were just perfect. Met Santa outside one house and he kindly posed with the kids (big & little)

Apart from the Santa, some people had added that little bit extra, such as decking out the family car to represent Santa delivering presents. This was a nice touch, even after we explained to Ben & Chloe that, "no, the presents aren't for you." 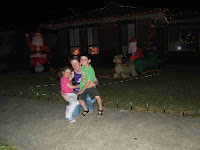 Lots of lawn furniture also featured as well as thousands of Christmas lights - which, unfortunately do not photograph real well.

All in all, it was a very pleasant outing and Chloe in particular slept soundly that night - we must have really tired her out in spite of all the excitement.