Way back in March 2006, I published details of the new hockey facilities at Warrnambool, and told how Robbie had come out of retirement for a bit of a mid-week run. At the time, I said I had a video showing her scintillating skills on the artificial surface. I have now, finally, uploaded it; so, sit back and be enthralled by the absolute wizardry on display ...... 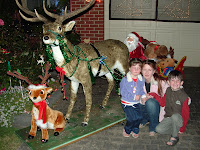 Did our annual tour of the Christmas light displays again this year. On holidays for a couple of weeks, so we had a clear back seat in the car. Reminiscent of the big Queensland holiday - Lorelle in the front, Grandma in the back between Ben & Chloe. At least we didn't have very far to travel this time. 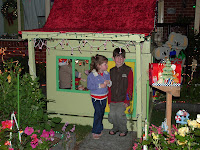 Night was a bit cold with a little rain sprinkling about, so we didn't do much walking. Mostly just surveying the sites from within the car, driving slowly past the better offerings. Did get to wander once, as testified to by the pictures. 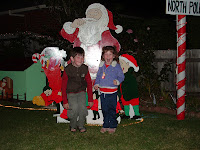 Lorelle navigating meant that we got a pretty good run and actually saw all of the Warrnambool entries that were listed by the local paper - the Standard. Finished up around 11 pm, which of course is a bit late for the youngens, but they had a great time and were very well behaved - relaxed and happy, although Chloe was getting a bit tired by the end of the night.
Posted by Smirc at 1:30 pm No comments:

We've inherited an aquarium from Lorelle. When she shifted, the new house was a bit smaller than Dennington, so she didn't have space for a few things - such as a 6' fish-tank and a couple of other, smaller tanks (in fact, we don't think she has space for about 80% of the stuff she took with her, but that's another story - and she seems to be getting organised now). 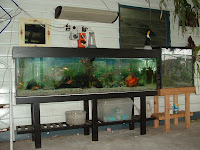 Now that I've started a couple of weeks holiday, thought I'd get stuck into tidying up the outdoor area and garage. This caused me to immediately get sidetracked into setting up the aquarium. A bit of a clean, setting-up power outlets and away I went. Didn't take long before it was furnished and filled. A bit of 'conditioner' to kill off the chlorine and other foreign additives we get in the town water supply and it was ready to be populated.
Called Robbie out, and with great pride, asked "What do you think?". Her response was to grab her purse and say "Let's go, we've got fish to buy!" Visits to three different pet shops and 'voila!' - we are now the proud parents of 27 new additions to the menagerie - one large gold fan-tail, 20 comets, two 'uncoloured' fish - to add a bit of colour, two orange-capped whatsa-ma-callits, one black walking fish (which you never see because it hides at the back behind the rocks) and last, but not least, a medium sized black moor. One thing we have discovered is that fish prices have definately kept pace with inflation - the last time we had an aquarium was several years ago.

We're into day three of 'the tank' and we haven't lost any fish yet - so things are looking good.
Posted by Smirc at 6:38 pm No comments: