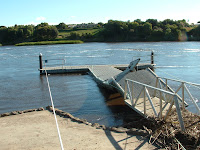 Still keeping a photographic log of the river level at Jubilee Park - but I won't bore everyone with constant updates here.  When it has subsided to normal level, I will measure (using the post that I have made infamous) the final distance and post that. 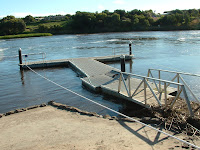 However, we were just down at the jetties to take the latest series of photos when one of them, badly damaged, suddenly and with a great "thud" fell back to something approaching normality.  The two pictures included here show that transition.  The really unfortunate thing was that I had just finished taking a video (using my new HD Digital Video camera) when it all happened, so I JUST missed getting the whole thing on film - or these days, should that be in memory?

But, it does show why the authorities cordon off these areas.  If anyone had been clambering over the structure at the time, they could have been seriously hurt.
Posted by Smirc at 7:18 pm